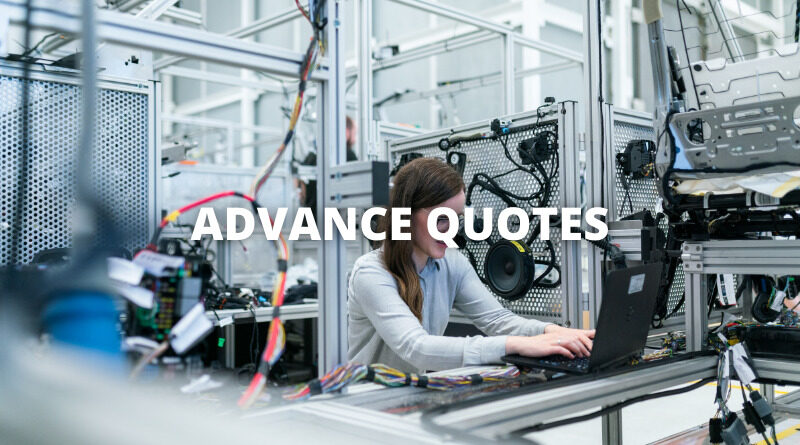 These advance quotes will inspire you. Advance to move forward or make or cause to make progress.

1. “If there is technological advance without social advance, there is, almost automatically, an increase in human misery.” Michael Harrington

2. “ Others have said it before me. If you don’t have a seat at the table, you’re probably on the menu. And so it is important that we have women in the United States Senate – strong women, women who are there to help advance an agenda that is important to women.” Elizabeth Warren

3. “The advance of technology is based on making it fit in so that you don’t really even notice it, so it’s part of everyday life. “ Bill Gates

4. “ The most important thing we can do is inspire young minds and to advance the kind of science, math and technology education that will help youngsters take us to the next phase of space travel.” John Glenn

5. “ Reacting in anger or annoyance will not advance one’s ability to persuade.” Ruth Bader Ginsburg

6. “ Every great advance in science has issued from a new audacity of imagination.” John Dewey

7. “Every election is a sort of advance auction sale of stolen goods.” H. L. Mencken

8. “Cooperation and respect for each other will advance the cause of human rights worldwide. Confrontation, vilification, and double standards will not.” Robert Mugabe

10. “If we all worked on the assumption that what is accepted as true is really true, there would be little hope of advance.” Orville Wright

11. “Since we can’t know what knowledge will be most needed in the future, it is senseless to try to teach it in advance. Instead, we should try to turn out people who love learning so much and learn so well that they will be able to learn whatever needs to be learned.” John Holt , Advance quotes learning

12. “If what I do prove well, it won’t advance. They’ll say it’s stolen, or else it was by chance.” Anne Bradstreet

13. “We know we cannot underestimate the importance of emergency planning in our region, nor can we assume we’ll have ample warning time. If an earthquake or terrorist attack hits, we won’t necessarily have advance alerts or opportunities to double- and triple-check our plans.” Ellen Tauscher

15. “Use power to help people. For we are given power not to advance our own purposes nor to make a great show in the world, nor a name. There is but one just use of power and it is to serve people.” George W. Bush

16. “There is no finer sensations in life that which comes with victory over one’s self. Go forward to a goal of inward achievement, brushing aside all your old internal enemies as you advance.” Vash Young

17. “Childhood and adolescence are nothing but milestones: You grow taller, advance to new grades, and get your period, your driver’s license, and your diploma. Then, in your 20s and 30s, you romance potential partners, find jobs, and learn to support yourself.” Pamela Druckerman

18. “Winners make a habit of manufacturing their own positive expectations in advance of the event. “Brian Tracy

19. “Remember that a civilized nation cannot just have one party; if there were only one party, this would merely be a dictatorship. Politics could not advance.” Sun Yat-sen

20. “No one has a monopoly on truth, and science continues to advance. Yesterday’s heresies maybe tomorrow’s conventional wisdom. “ Dean Ornish

21. “If you wish in this world to advance your merits you’re bound to enhance; You must stir it and stump it, and blow your own trumpet, Or, trust me, you haven’t a chance.” William Gilbert

22. “Receiving the authority of the priesthood by the laying on of hands is an important beginning, but it is not enough. Ordination confers authority, but righteousness is required to act with power as we strive to lift souls, to teach and testify, to bless and counsel, and to advance the work of salvation.” David A. Bednar

25. “Progress is seldom simple; it comes with costs and casualties, even challenges about whether a change represents an advance or a retreat.” Nancy Gibbs

26. “Great progress was made when arbitration treaties were concluded in which the contracting powers pledge in advance to submit all conflicts to an arbitration court, treaties which not only specify the composition of the court, but also its procedure.” Ludwig Quidde

27. “While that amendment failed, human cloning continues to advance and the breakthrough in this unethical and morally questionable science is around the corner.” Mike Pence

28. “Listen, you know this: If there’s not a rebellious youth culture, there’s no culture at all. It’s absolutely essential. It is the future. This is what we’re supposed to do as a species, is advance ideas.” John Lydon

29. “If you only do things where you know the answer in advance, your company goes away.” Jeff Bezos

30. “Long-term economic growth depends mainly on nonmonetary factors such as population growth and workforce participation, the skills and aptitudes of our workforce, the tools at their disposal, and the pace of technological advance. Fiscal and regulatory policies can have important effects on these factors.” Jerome Powell

31. “Let us not bankrupt our todays by paying interest on the regrets of yesterday and by borrowing in advance the troubles of tomorrow.” Ralph W. Sockman

32. “May the days be aimless. Do not advance action according to a plan. “ Don DeLillo

33. “I think that in the 21st century, medical biology will advance at a more rapid pace than before.” Shinya Yamanaka

34. “Humanity is still advancing; and it will probably continue to advance for hundreds of thousands of years more, always on condition that we know how to keep the same line of advance as our ancestors towards ever greater consciousness and complexity.” Pierre Teilhard de Chardin

36. “Whether addressing immediate crises or building long-term foundations of peace, the United Nations will remain committed to solutions that advance the global good.” Ban Ki-moon

37. “Kneeling for the anthem does nothing to advance solutions to racial injustice, police brutality, or any other social plight. It is a slap in the face to patriotism itself. It is a statement that America as a country is no longer worth standing for.” Matt Gaetz

38. “For the division of labor demands from the individual an ever more one-sided accomplishment, and the greatest advance in a one-sided pursuit only too frequently means dearth to the personality of the individual.” Georg Simmel

40. “People who use time wisely spend it on activities that advance their overall purpose in life.” John C. Maxwell

41. “All that is human must retrograde if it does not advance.” Edward Gibbon

43. “Wireless is the largest information, communication, and technology platform in history, and mobile broadband is transforming how we can deliver educational materials and experiences to all students. The technology now exists to support learning on a massive scale and advance the 21st-century skills needed to compete in the global economy. “ Peggy Johnson

44. “I cannot help fearing that men may reach a point where they look on every new theory as a danger, every innovation as a toilsome trouble, every social advance as a first step toward revolution and that they may absolutely refuse to move at all.” Alexis de Tocqueville

45. “Truth is mysterious, elusive, always to be conquered. Liberty is dangerous, as hard to live with as it is elating. We must march toward these two goals, painfully but resolutely, certain in advance of our failings on so long a road.” Albert Camus

46. “I prefer to play and lose rather than win, because I know in advance I’m going to win.” Eric Cantona

47. “An idyllic period of my existence was when I had a den attached to my home… a writing den and no one had access to that unless they had their own special visa, applied for weeks in advance.” Wole Soyinka

49. “Mankind will not forever remain on Earth but, in the pursuit of light and space, will first timidly emerge from the bounds of the atmosphere and then advance until he has conquered the whole of circumsolar space.” Konstantin Tsiolkovsky

50. “When we walk away from global warming, Kyoto, when we are irresponsibly slow in moving toward AIDS in Africa, when we don’t advance and live up to our own rhetoric and standards, we set a terrible message of duplicity and hypocrisy. “John F. Kerry

51. “I look forward to working with our leadership team to advance the causes of smaller government, lower taxes, eliminating terrorism, and providing affordable health care, among other issues.” Howard Coble

52. “Fear of nothingness is fear of a certain physicality, a physicality whose phenomena I cannot predictably demarcate from its reality in advance.” Timothy Morton

53. “As we advance in life it becomes more and more difficult, but in fighting the difficulties the inmost strength of the heart is developed. “Vincent Van Gogh

54. “ The existence of an area of free land, its continuous recession, and the advance of American settlement, explain American development. “ Frederick Jackson Turner

55. “You can’t say civilization don’t advance… in every war, they kill you in a new way.” Will Rogers

56. “Do not yield to misfortunes, but advance more boldly to meet them, as your fortune permits you.” Virgil

57. “Each one of us decides to incarnate upon this planet at a particular point in time and space. We have chosen to come here to learn a particular lesson that will advance us upon our spiritual, evolutionary pathway.” Louise L. Hay

58. “ There is no force in the world that can block the powerful march of our army and people, who are holding high the banner of the suns of great Comrade Kim Il Sung and great Comrade Kim Jong Il and continuing to advance under the leadership of the party and with strong faith in sure victory.” Kim Jong-un

59. “He who could foresee affairs three days in advance would be rich for thousands of years.” Thomas Carlyle

60. “Especially amid the COVID-19 pandemic, which has disproportionately impacted tribal communities, we must invest in infrastructure in order to advance economic recovery and create much-needed jobs.” Sharice Davids

61. “ Advance, and never halt, for advancing is perfection. Advance and do not fear the thorns in the path, for they draw only corrupt blood.” Khalil Gibran

62. “Nothing can be better calculated to advance our interests and character than the establishment of a liberal and disinterested policy, enlightened by patriotism and guided by wisdom.” Sam Houston

63. “It is easy to underestimate in advance the impact of globalization and automation – I have done it myself.” Moshe Vardi

64. “The anvil of justice is planted firm, and fate who makes the sword does the forging in advance. “Aeschylus

65. “I try to live my life one day at a time, and if I look too far in advance, I get really stressed.” Hope Solo 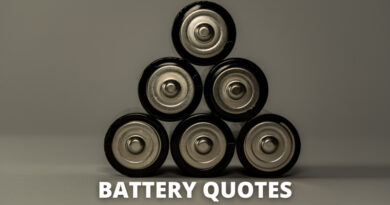 65 Menace Quotes On Success In Life 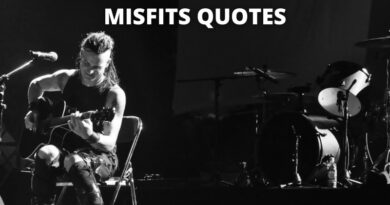